We love pozole in my house! That is why this Vegan Pozole Inspired Soup recipe is one of my favorites. There are so many kinds of pozole. I have veganized a variation of pozole rojo which many would simply call "Caldo". Whatever you want to call it, it's delicious.

What makes this soup similar to pozole is the addition of Hominy. Hominy is from field corn. It has a slightly earthy flavor and chewy texture that is really delicious and perfect for soup. This soup is heavy on the corn. It has both corn on the cob, broken into smaller pieces and off the cob. I love adding corn on the cob to soups as it infuses the broth with tons of flavor!

Traditional pozole uses different dried chiles to fortify the broth. I simply used canned chipotles in this Vegan Pozole Inspired Soup. I do this to make the recipe simpler since there are so many vegetable ingredients that are giving the broth depth. Butternut squash, carrots and sweet potatoes all break down and release starch and sugars into the broth that complimented the smoky chipotle peppers.

Cilantro is a magical ingredient. That's why its used twice in this Vegan Pozole Inspired Soup recipe. I suggest you cut your bunch of cilantro in half reserving the leafy side for the garnish and the stems side for the blending. Many people do not know that the stems are edible and full of flavor. I love using the stems in salsas and soups. Blended with water and other ingredients you can't notice you are using the woodier stems. Just be sure to wash them well. 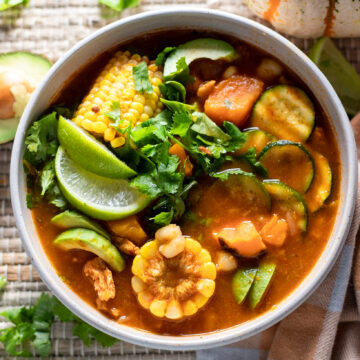 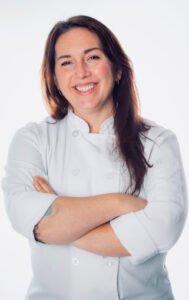 VEGAN CRABCAKES!! How many could you eat? Happy

Do you have a summer garden? This EASY RATATOUILL

Salad and Pasta, separate plates or together? Ea

Indian food? Smash or Pass? If you are on team sm

Are you ready for summer? This Farro Salad is the

Are you team sweet or team savory breakfast? If y

Do you like slaw style salads? This one is one of

Fruit on salads? Yes or No? I used to think fruit

What’s your favorite BBQ side dish? Save this r

Do you love to bake? To say I am obsessed with sh

CONTEST COSED!!! Winners are: @amenesescastro and

Do you eat with the seasons? The first peaches ar

What is more appealing than a bowl of pasta?! Sav 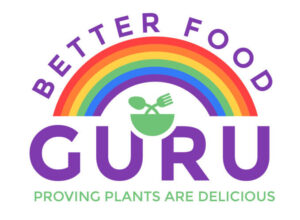